Last night we chose to eat at The Priory on Ashby road. Considering it was absolutely packed with weekend revellers in the bar the food dinning area was realitivly quiet so that was good.

We weren’t waiting too long even with the bar staff rushed off their feet.

We ordered the ROUTE 66 SLINGER Beef burger for £6.99 with iceberg lettuce and sliced tomato, topped with cheese, two smoked streaky bacon rashers, two hash browns and a free range fried egg. Served with skinny fries and BBQ sauce, we also ordered a side of onion rings with that. 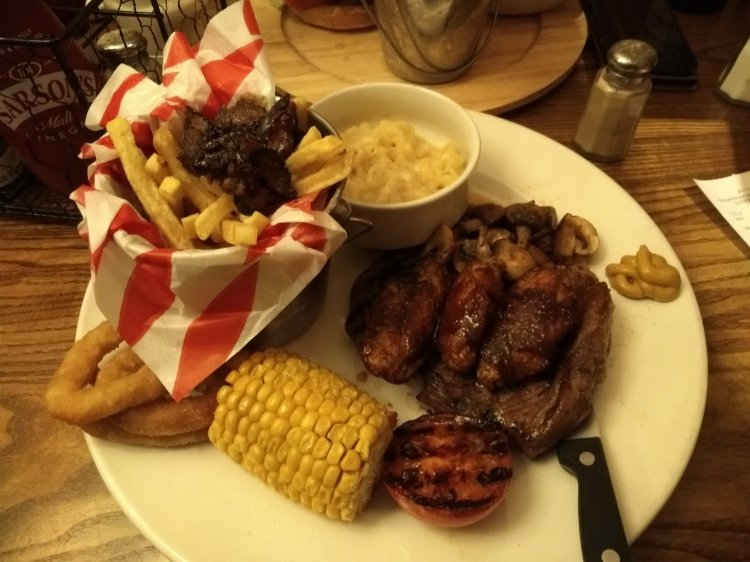 It was all very tasted and the portion was good for the price. The only issue we had was the meals were cold which was probably due to the lack of staff so it was maybe left on the side longer. I do like hot food but on this occassion we were just so hungry we couldnt be bothered to complain about the temperature of it and just ate it. Everything was very tasty and the steak was cooked well.
The burger was nice and thick and you got plenty in it, we requested it without an egg. The burger did come sauceless without its BBQ sauce but we made do with the 4 sauces on the table.
As I say due to the fact is was very busy we didnt like to moan about it being served stone cold but am sure on a less busy day we probably wouldnt have had that issue.

Finally we got one dessert as I was full at this point. We opted for the cookie dough cheesecake. You got quite a large slice and it was nice. Maybe like to see a thicker base but that’s a preference of a cheesecake lover.

With the main meala you could add a drink for a pound which was good. I thought the food was very enjoyable and compared to some other chain pubs it wasn’t dissapointing other than the temperature of it.