Skip to content
Crazytown, Surya and Marx – Tuesday 31st July 2018 at The Lincoln Imp, Scunthorpe.
Having previously performed at the Lincoln Imp in October last year, US band Crazytown returned to the venue, to play the final date of their current UK tour.
The opening act for the night was Hull based rapper Marx, who was happy to be performing a local gig, after just
finishing up a tour.

Marx has played the Imp before, but unfortunately I missed that event, so it was good to get the chance to see him perform.

You don’t seem to see or hear much of the local rap scene so I was glad to see that Marx put on an enjoyable set and shows a lot of potential.
Leeds based metal band Surya followed Marx, who have been performing with their current line up for just under a year, were the heaviest act of the night.

I believe it was their first time performing together at the Imp and they put on an entertaining set that warmed up the crowd for the main headliner who was on next.

Crazytown proved that they are more than just a one hit wonder, which they refer to as “The curse of the Butterfly”, named after their number 1 hit single “Butterfly”.

The crowd sung along to every song as the band proved that they are just too good to be playing small venues.
This was the final date of their UK tour and the band said they probably wont be back in the UK till next year.
It was a great way to finish their UK tour, with The Lincoln Imp being personally requested by the band for their final date, after enjoying themselves so much last time.

Overall it was a great night with three fantastic acts, headlined by a fantastic international act, which proves why The Lincoln Imp is fastly becoming one of the local areas most popular music venues. 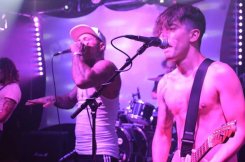