On Friday 19th June Scunthorpe Nights were invited along to an organised night of Ghost hunting with The Simply Ghosts team.

The Team have been nominated for the Soul & Spirit awards 2015 alongside other popular ghost hunters such as Zak Baggins from the US show “Ghost Adventures”. Vote for them here!

The night started off with a sit down briefing, which included some history and a run down of equipment the team carried. We were then taken into the courtyard to hold hands in a circle and split into smaller groups of 6 people. We spent the night moving around different areas with different members of the team.

It was a laugh really and all the team members were funny and friendly. I didn’t quite know what to expect. The building itself didn’t feel that creepy or scary even in the pitch black.

We took part in glasswork, where a glass and a battery candle were placed in the middle of what I can describe as a Ouija board table. We didn’t have much success in our group with this exercise but some of the other groups experienced some movement. We also used a radio signal device for ghosts to transmit answers through the frequency, I didn’t hear anything through this as it scanned through radio stations and picked up sound snippets of songs and speaking on the radio. The thing that worked well was probably just putting our hands (and energy) onto the table and getting knocking and scratching responses.

It wasn’t until the second to last location we finally got some activity, now I tried to look for an explanation and I watched carefully as to if this could be set up because I am not a complete skeptic of the unknown and paranormal but I do sometimes find there is probably an explanation. So in this room we met Rosemary (the boss) and another female member of the team. We all took a seat around a Ouija table and started to call out to any spirits there. Now the thing I couldn’t explain is there were responses on the underside of the table to our knocks and questions but everyone’s hands were in view and on the table in front of us. The table also lifted from the ground, it shook and rocked. It also on request lifted onto one leg and slammed down. Now I would say perhaps one of the organisers could have lifted it but to be honest I couldn’t see how they could. It was a rather heavy table and it wasn’t lifting in a way they could have pushed it up especially with their hands on it and they weren’t tipping it that I could see.

Anyway that will go unexplained and remain something I did find quite strange but a little exciting at the prospect it could be something unexplainable. All in all it was a good night out and it was fun with a lot of laughs, everyone was a little tired nearing the end and by 3am were definitely ready for home. I would say a lot of activity would have been more exciting but then it would have probably been less believable and if ghosts do exists I can imagine being asked over and over again to respond and move tables can get quite tedious for them.

I would recommend trying one of these nights, even if you don’t believe it at all or you are very scared of this type of thing. I would never have imagined myself touching a glass and taking part in contacting spirits but in the moment it’s not actually that scary. The only thing I found awkward was the calling out. In our small groups with people we didn’t know it did feel strange to be asking questions out loud to spirits so I did hold back a bit and observed more than spoke as it did make you feel quite silly in front of strangers. I’d recommend you do try to join in a little but it is hard initially to overcome shyness if you’re that way inclined. For the more confident speakers it shouldn’t be a problem.

The whole experience was quite light-hearted and funny and there were a lot of laughs and innuendos along the way. It would be a really good night out with a group of friends. If you fancy visiting a haunted UK location with the Simply Ghosts team then check out their next events via www.simplyghostnights.co.uk 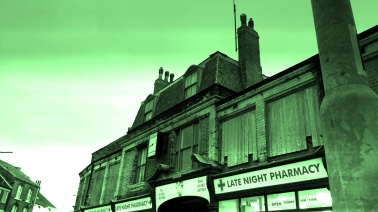