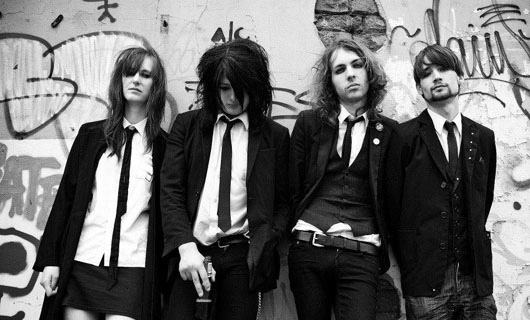 In Town This Weekend: The Ming City Rockers

Ming City Rockers hail from Immingham situated near to Grimsby. (the ‘Ming’ in their name comes from the name of their hometown) They may not share much love for their hometown but it gave them inspiration for a name to remember and if it weren’t for the small town you might never have got the Ming city Rockers.

The foursome create impassioned music that is often compared to sounds of The Stooges, MC5 and a handful of punks from a time when skinny jeans were just standard.

You can’t really miss them at a gig whether they are on stage or just walking around the venue.With their big hair do’s and smart suit jacket & tie dress code. I have never seen these 4 in a t-shirt and jeans on stage or in a photo for that matter.It’s like they have their own uniform to rock.

I’ve seen a few times the band being slated for ignorance and attitude, but I wouldn’t be put off by this because, they aren’t they just re-tweet it!

Their I don’t care attitude and apparent ignorance is rock and roll and it seems to work pretty well for them, so just enjoy the music they create. Also in my personal experience they didn’t tell me to f Off. Instead they put their arms round me and posed for a band whore photo.I did feel as though my hair let me down a little that day, I should have gone for the back comb and triple hairspray.

I would speak more of their performance but we were in the basement of the venue filming a band interview with Skarlett Riot… but I do know that night was quite full and they supported The Struts.

Video for Get outta your head

Lucky for us #Scunthorpians this weekend The Ming City Rockers hit Henry’s to headline the Peacock sessions which is £5 a ticket and now £5 on the door and don’t forget you also get Hardr:ve included in that ticket price. See Here