“He sings like Elvis, but most importantly, he seems to capture the very soul of Elvis – his charisma, his gestures; hell, he even walks like Elvis!”

Europe’s most successful Elvis Presley tribute show, A VISION OF ELVIS stars the incomparable ROB KINGSLEY whose “striking physical resemblance to Presley means you Just Can’t Help Believing’ you are watching The King!” (The Reviews Hub)

Currently celebrating ten years of touring, Rob brings A VISION OF ELVIS to UK venues in July and September and will take audiences on the Elvis journey from Elvismania and legendary concerts to his position as the best-selling solo artist in the history of recorded music. Rob Kinglsey has performed A VISION OF ELVIS all over the world including Wembley Stadium and has performed for audiences and Elvis fans, royalty and VIPs.

The show starts in 1968: the major musical event of the year is the first live TV special for Elvis Presley in what became known asThe ’68 Comeback Special marking his return to live performance after seven years of making three films a year for Hollywood. Drawing phenomenal ratings, this event re-established Elvis as the major entertainment star of the decade; 12 months later he was starring at the International Hotel in Vegas, securing his place in history as the King of Rock ‘n’ Roll. This production celebrates 50 years since the TV phenomenon and is testament that his songs live on and the King still rules. 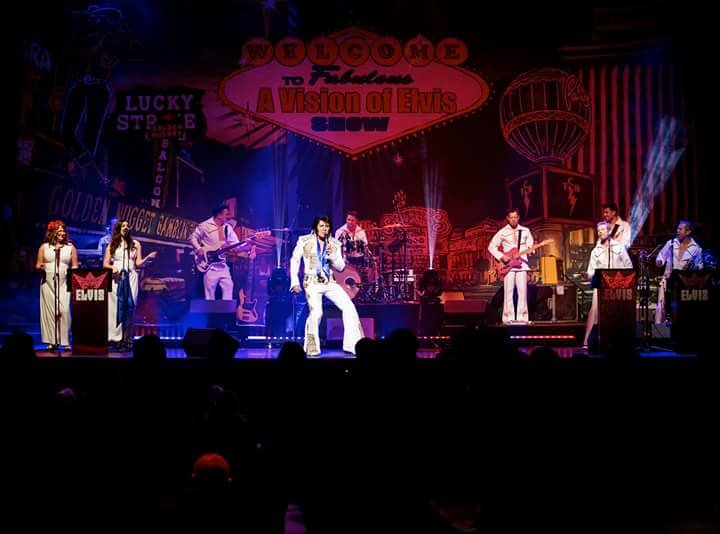 A VISION OF ELVIS recreates the drama and intensity of the famous ’68 ‘comeback’ concert. Hits include Heartbreak Hotel, Blue Suede Shoes, Hound Dog, Jailhouse Rock, All Shook Up, In The Ghetto, Suspicious Minds, American Trilogy and many more. The show’s costumes, instruments and stage design are authentically recreated to give the feel and energy of a live Elvis concert. Rob’s contact with the audience is immediate and together with his live band, backing vocalists and production team, he takes the audience on an emotional roller coaster through time for a true Elvis concert experience.

Rob Kingsley chats about the show:

What do you like best about performing as Elvis?

Rob: Elvis is my hero and such an icon. I’ve been an Elvis fan from a very young age – the music is incredible for me; there’s nothing better and to be able to recreate the musical arrangements with world class musicians is amazing. We are very lucky to get to perform all over the world and to meet so many Elvis fans. You couldn’t ask for anything more.

Rob: An American Trilogy – it’s such a powerful and meaningful song.

Rob: Getting to perform in so many prestigious theatres and venues, travelling to different countries and meeting so many people who come along to our shows.

Tell us five things you couldn’t live without when you’re on tour ?

Rob: My wife, who is our stage manager; my band, sound & lighting crew; my Alexa to listen to Elvis; my vocal zones [a tom jones tip] & my favourite aftershave.

And finally what’s the audience reaction like when you’re onstage?

Rob: This is the best part of the show when I’m standing in the wings it’s that anticipation before I step out then when the intro music starts and I can hear the audience clapping and whooping along it creates such an energy.To see so many people enjoying the show laughing,dancing,singing reacting the way they do makes it all worth while.I am so lucky to be able to do what I do performing my tribute to Elvis Presley.

Tickets are available via www.scunthorpetheatres.co.uk