The Easter Pantomime visit to the Baths Hall has now been and gone, but we had the pleasure of going along to review, undoubtedly we were probably the only two adults there without a child but that didn’t seem to matter once the show started. As we walked in the large stage curtain & surround was quite classic and somewhat magical with it’s glittery roses and projected text “Beauty & The Beast”.

The auditorium was full to the top with flashing swords and twirling light sticks. It was pretty clear from the get go that this panto production had some money behind it. The show featured a well-known cast of Dani Harmer as Beauty (usually known for her popular children’s TV show Tracy Beaker), Lee Latchford-Evans from Steps played the Beast/Prince but the star of the show had to be Mr Bobby Davro, the 80’s entertainer. Bobby played Silly Billy and what a good job he did of it, with the aid of the pantomime Dame Dotty they both created so many moments of pure laughter. Bouncing off each other reactions, hiccups and comments, I honestly think that’s the most I have laughed at a show for a while, I suppose it makes something more funny when you know it’s for children but there’s a hidden agenda for some innuendos in there.

Now for the first half the audience seemed quite icy and reluctant to get stuck in with the panto theme of things, I’m not quite sure why. The scene and plot is set by the pyrotechnic flash and pop of the panto fairy “Fairy Liquid”. As she takes you through the story from start to finish popping in at intervals throughout the show. The Villain in this case is the French rent collector Baron Bourbon.

The shows first song was familiar and current, with the large dancing cast performing the hit “Shake It Off” by Taylor Swift and “Happy” by Pharell Williams. The use of modern songs was a theme throughout with some lyrical changes added, “All About That Bass” was a good pick for the Dame and Baron Bourbon, with the Baron switching his lyrics to all about that tache. Incorporated into the show were some local children from Scunthorpe as dancing extras in the background.

All of the sets were fantastic and quick to change, which really helped move the show along quickly rather than minutes of darkness sat waiting. The sound, lights and production of the show were executed nicely. The costumes and effects were also very impressive with the use of on stage fireworks and live musicians up on the balcony providing the sound effects. 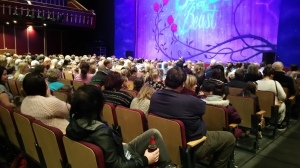 Pantomimes rarely run completely smooth but that is part of the charm, the unpredictability of what could go wrong and does go wrong just adds to the show and provides a unique experience for every show. There was obviously a script, Dani and Lee kept professional at all times and had stunning voices for the number of songs they performed, a lot of the other cast members seemed to give more of an impromptu performance along side their script, which is why it made it so much more funny rather than just rigid. Towards the second half of the show the audience seemed to warm to the cast and pantomime atmosphere and interact a little more with the classic “He’s behind you” and “Oh No He Isn’t” and the villain boo’s.

All in all a fantastic night, it must have been good because we were still talking about it this morning. The Baths Hall staff were polite and welcoming as always even with the hectic start with people from the previous showing leaving and the new audience arriving. I would definitely go and watch one of these touring shows again next time it comes to town.
http://www.enchantedentertainment.co.uk

One thought on “Review // Beauty & The Beast – Easter Pantomime”