In September 2016 Luke visited North Lincolnshire Museum and selected 5 small artefacts that he and the curator felt represented the region.

The objects span a period from ancient through to modern times. Each object was then 3D scanned, 3D printed in wax and then cast in 18ct gold. The gold replicas, each worth at least £2500 are to be hidden across Scunthorpe and the region for the public to find and keep. 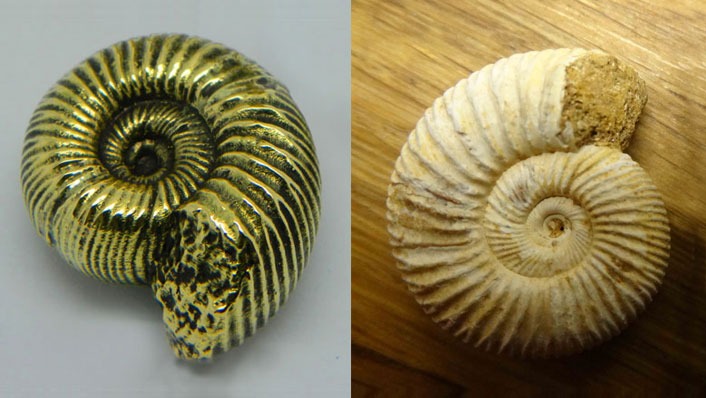 Clues to the whereabouts of the 5 gold artworks have been woven into the visual content of 5 paintings for exhibition in 20-21 Visual Arts Centre from 18th February –  29th April 2017. Luke has been working with a codebreaker from an unnamed government agency to set the visual clues within each painting.

The paintings in the exhibition range in difficulty. One painting should be so easy to solve even a child may be able to work out the location of the golden artefact. Whilst other codes will be harder to crack. One puzzle painting may be so difficult to decode, the gold may never be found. As a legacy for the project, this painting will remain on display in the North Lincolnshire Museum with the associated golden artefact remaining hidden for the public to find one day.

Documenting the fabrication of the golden replicas, we will use this new arts project to celebrate the history of the original artefacts and the region. Films and photos of this process will also be displayed at 20-21 Visual Arts Centre as a part of the exhibition.

Luke said “For me, Treasured City is a creative treasure hunt. A playful fusion of history, craftsmanship, mathematics, codebreaking, poetry and painting.”

“I like the idea that ancient objects that were once hidden beneath the earth and were discovered and displayed at the museum are now being re-hidden. The art project is a way to consider and celebrate the original artefacts in relation to the history of Scunthorpe and the region. I hope the public will enjoy visiting 20-21 Arts Centre and exploring the town and surrounding countryside.”

The five objects selected from the museum, are from different time periods spanning from the modern era, through Tudor, Viking and Roman times, and all the way back to the Jurassic era.

The first object chosen by Luke is an intricate 16th century Ivory Fisherwoman figurine which was discovered in a garden on West Street in Winteringham. At 6cm tall, the figure is carrying two fish in her left hand, indicative perhaps of Winteringham’s location north of Scunthorpe on the banks of the Humber Estuary.

Luke said. “I love this object. It has been so well carved with all the tiny details and is somehow intimate and personal. I wonder how many people have owned and held this object – why was it made and who for?”

The second object cast in gold is the recognisable Janus train used in the steelworks of Scunthorpe for transporting materials across the site. The ‘two-faced’ train was chosen by Luke as it represents the Scunthorpe steelworks which has dominated the town and its history.

Representing Scunthorpe’s ancient geological history, an ammonite is the third object in the Treasured City hunt. Ammonites with their typically ribbed spiral shell form are perhaps one of the most recognisable fossil types, with their name originating from the Greek ram-horned god Ammon. Ammonites belong to a group of predators known as cephalopods, which includes their living relatives the octopus and squid, and they lived in the sea between 240 and 65 million years ago.

A beautiful Viking brooch is the fourth item that Luke has cast into gold, selected to pay homage to the region’s Viking history. The brooch, which was discovered by a metal detector in Ewerby, is a typical trefoil shape and is decorated with interlaced animals in a Borre style. Trefoil brooches such as this were traditionally worn by Viking women. In the 9th Century, Vikings raided the North East coast of Britain ahead of a full scale invasion in 866AD. After crossing the Humber, the Danes sacked and captured York; traditionally a great defensive stronghold, despite fierce Northumbrian resistance.

Luke said:  “The brooch has such a strong and dynamic form. Its shape reminds me of all the wind turbines there are in the area. I wonder how many people have worn it over the centuries? ”

The final object is a small 3cm copper alloy ram figurine, believed to be 1st century Roman. Discovered in Winteringham like the Ivory Fisherwoman, the exact origins of the figurine are unknown but it is believed that it may represent a sacrificial ram within a household or temple shrine, or may even be a simple child’s toy.

Luke said “I chose this object as I know that farming and agriculture has always been important in the region. I like the fact that we don’t know exactly why the object was made or what it was for.”